A tragic event unfolded 20 years ago in front of many of our eyes. We remember exactly where we were, what we were doing and how we felt.

A national disaster of epic proportions happened on 9/11 and it’s a day when time stopped and the world slowed to a halt. However, I remember how united we were and how, through sports, many of us healed.

A little over a year ago, the world once again stopped--this time for an invisible attacker. While after some time sports did return, they did not return in the same fashion until last Friday, Sept. 10.

Under a fading prairie sunset, the CCCHS Tiger football team took to the field in front of a packed house at Otto Unruh Stadium. The Boys of Fall ran through a tunnel of motorcycles and fans while carrying the American flag and remembering those who fell 20 years ago.

We are still dealing with this pandemic, but Friday Sept. 10, the community reunited, tailgated, and packed the stands for the orange and black. The band played, the cheerleaders led the crowd, and in “The Comeback Season,” the Tiger football team opened their home season with a 57-0 victory in the “Tiger Bowl” over Jefferson West Tigers.

Clay Center won the toss and received the ball. After the kick return, CCCHS set up shop on their own 40. The hosts went on a nine-play 60-yard drive, ending with a three-yard touchdown run by junior quarterback Mark Hoffman with 8:20 left in the first. The point after attempt missed wide right as the Tigers took a 6-0 lead over Jeff West.

The opposing Tigers took over on their own 36 after the kick off. In what would be a theme throughout the game, Clay Center’s defense played aggressively and forced a three-and-out. On the punt, senior Zane Bloom shot past the blockers, partially blocking the punt to give CCCHS great field position on the Jeff West 47.

On the third play of the drive, Hoffman hit Brody Hayes on a slant route near mid-field for a 13-yard gain to get the CCCHS offense rolling. On the next play, Senior Lane Musselman took a pitch to the left side of the field. After his way was blocked, he reversed course and cut back to the right to explode for a 54-yard touchdown run. The two-point conversion was good as the home team took a 14-0 lead with 3:57 left in the first.

Clay Center completely shut down the Jeff West offense on the next drive, forcing the visitors to punt on fourth-and-22. Freshman Cole Pladson blocked the punt as Clay Center started on the Jeff West 34. The CCCHS Tigers moved slowly down the field and after eight plays faced a fourth-and-goal. Behind stout offensive line play, Hoffman muscled his way to the end zone for his second touchdown on the night. Bloom split the uprights on the PAT, giving Clay Center a 21-0 lead with 9:51 left in the half.

The hosts almost immediately got the ball back after Hayes picked off the Jeff West quarterback on third-and-long. After a good return by Hayes, CCCHS set up shop on their own 46. Following five straight runs, Clay Center was knocking on the door with a first-and-goal on the visitors’ five-yard line. However, JWHS forced a fumble on the next play and took over on their own 20 after a touchback.

Once again, the hosts’ defense and special teams proved too much as after forcing another three-and-out, Braylon Berry blocked the punt then scooped it up and scored, pushing the Tiger lead to 27-0 with 4:00 left in the half. The Bloom PAT failed.

For the sixth straight possession, Jeff West was forced to punt after a three-and-out. Braxton Mellies got his hand on the ball to block the fourth Jeff West punt. Weston Hammond recovered the ball on the visitors’ 13.

After struggling to gain ground, Clay Center was forced to settle for a 26-yard field goal by Jackson Henry for a commanding 30-0 lead with 1:31 left in the half.

Following the kick-off, JWHS started on their own 31. The visitors got their only first down of the game on the first play with a 13-yard pass. On the next play, Hayes stepped in front of the opponent’s receiver and picked off the quarterback for the second time.

As time ran down, Hoffman hit a leaping Musselman in the middle of the field for a 27-yard completion putting Clay Center in striking distance of the goal line. Musselman capped off the quick possession with a two-yard TD run. Henry split the uprights on the PAT making it 37-0 for the home team with 14 seconds left. Jeff West ran the clock out to end the half.

The visitors opened the second half on their own 31 after the kick-off. A Loader sack on third-and-long forced Jeff West to punt and they got it off cleanly for the first time of the night.

Starting on their own 37, Clay Center went to the hot hand as Musselman broke loose for a 63-yard touchdown run--his third of the night. The Henry PAT gave Clay Center a 44-0 lead with 9:55 left in the third.

The home Tigers forced another three-and-out against Jeff West and with his motor still hot, Musselman broke free for a 56-yard punt return, getting tripped up 18 yards from paydirt. After a short run on first down, Carter Long broke free for a 15-yard touchdown run. The Henry PAT made it 51-0 with 8:07 left in the third and the start of the running clock.

Jeff West continued to struggle, now with the Tiger JV team forcing another three-and-out. After a bad punt, CCCHS started on the Jeff West 36. On second-and-eighth, Pladson turned the jets on to score a 34-yard touchdown and increased the lead to 57-0 with 2:30 left in the third. The snap on the PAT was bobbled and the attempt failed.

The opponents were forced to punt after another three-and-out to end the third.

Neither team got anything going on the next two drives as the teams exchanged punts to end the game as Clay Center took the 57-0.

Hoffman passed for 50 yards going 3-6 while rushing for 30 yards and two touchdowns. Musselman had a huge game with seven rushing attempts for a team-leading 159 yards and three touchdowns.

As a team, the host Tigers, for the second straight game, had over 325 rushing yards.

Head Coach Marc Henry said, “We have an aggressive mentality (defensively). Coach Lane has been blitzing them a lot. With the veteran leadership helping these young kids, they are competing hard and rallying to the ball. They continue to keep making plays and that changes the course of games.”

He continued, “It’s a mentality and these kids really buy into it. Luke Young wants to make pancake blocks on every play and when you have an offensive line like that, it helps our running game take off.”

Talking about his young core and how well they’ve been playing, Coach Henry said, “These kids have won at everything and it shows. They come out here whether it’s a Friday night or a JV game (and) they expect to win. Expecting to win is a complete different mindset than going out and playing because you’re happy to play and that’s helped our team grow.”

The Tigers host rival Wamego this Homecoming this Friday at 7:00 p.m.

Pic 1 - Senior Lane Musselman leaps up into the air to snag a 27 yards pass in Clay Center’s 57-0 victory over Jeff West Friday night. Musselman had three touchdowns on the day. 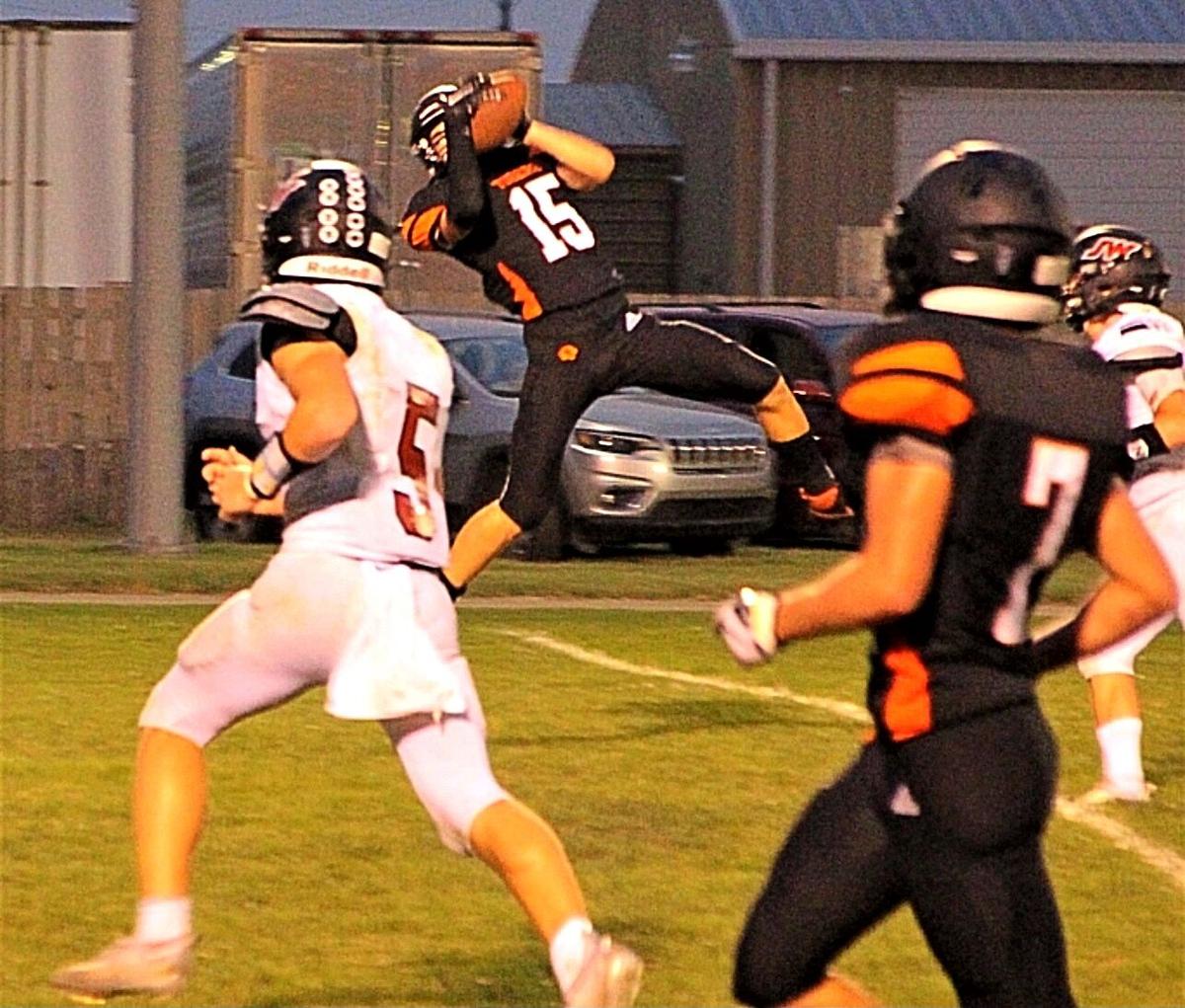 Insecurity in the marketplace

Welcome to Sophi Knows. September 11 has come and gone but should stay in our minds every day. We came together as a nation and should strive for that again.

Laughing in the face of hearing loss

Over the past year, I’ve had an unusually high concentration of columns related to the fact that I’m “no spring chicken,” as my mom used to say.

COLUMBUS, Ohio (AP) — The Republican-dominated commission charged with redrawing the maps of Ohio's legislative districts voted along partisan lines Thursday to use a proposed GOP map as the starting point for three days of public testimony.

Prevention is the Best Treatment

Prairie Doc® Perspectives for the week of August 22, 2021

Preaching to the Congregation

What can be trusted; what can be relied on; what stands firm no matter what? What isn’t shaky and shifting below our feet? Psalm 93 gives a response to those questions about instability and…