In its fourth outing, the Clay Center Community Improvement Foundation’s (CCCIF) annual Match Day event has eclipsed their previous record by bringing in $175,658.67 in a single day of fundraising. The massive increase in donations coincided with the CCCIF returning to hosting Match Day as an in-person event after hosting a purely virtual fundraising drive in 2020.

Last year, the CCCIF Gather for Good Match Day raised $137,850, with an accompanying $25,000 dollars in matching funds provided to the participating non-profits, setting a high bar for this year’s event. With more than $90,000 raised in the first 90 minutes of Thursday’s affair, the explosive start to the day’s fundraising goals caused CCCIF Chairperson Morree Floersch to exclaim, “Do we dare get excited?”

It would take less than an hour for Floersch’s question to have a definitive answer when, shortly before 2:30 p.m., the fundraising total crossed $140,000 and continued to climb.

Remarking on the success of the day, Floersch said, “I am so happy for everyone today. This is why I love being part of the [CCCIF], because I don’t have to choose just one organization.”

Many of the local non-profits involved in Match Day were gathered outside of the Clay County Museum, networking with each other and discussing their projects to prospective donors.

Chris Mellies and Garett Payne of the Clay Enter Zoo brought along a new friend to meet the public, Tank the African spurred tortoise. Tank is a band new addition to the zoo, having just arrived on Wednesday after being rescued from the side of I-70 outside of Goodland, Kansas last March.

Mellies said he and Payne were happy to be outside meeting with the community and discussing some of the exciting things planned at the Clay Center Zoo, noting how far the zoo has come based on donations from the Clay County community.

“We couldn’t do what we do without the people we have here,” said Mellies.

According to the CCCIF Gather for Good leaderboard, the following organizations were the top five to receive donations: 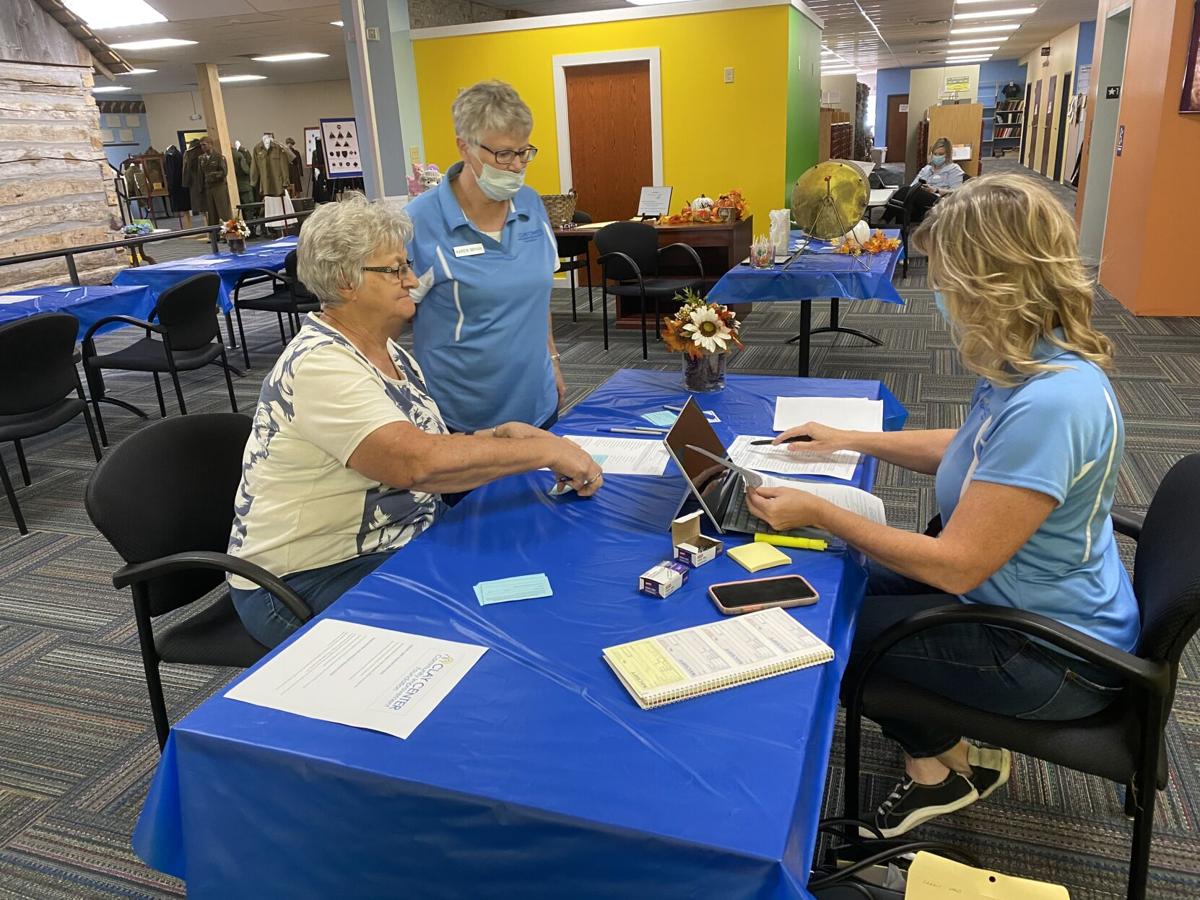 Kathy Yarrow (left) turns in her donation form to Jill Mugler (right) while Karen Bryan (standing) looks on. Everyone who turned in their donation form during the Match Day live event was entered into an hourly drawing to have a $50 donation made to their favorite charity. (Photo by Joshua Smith) 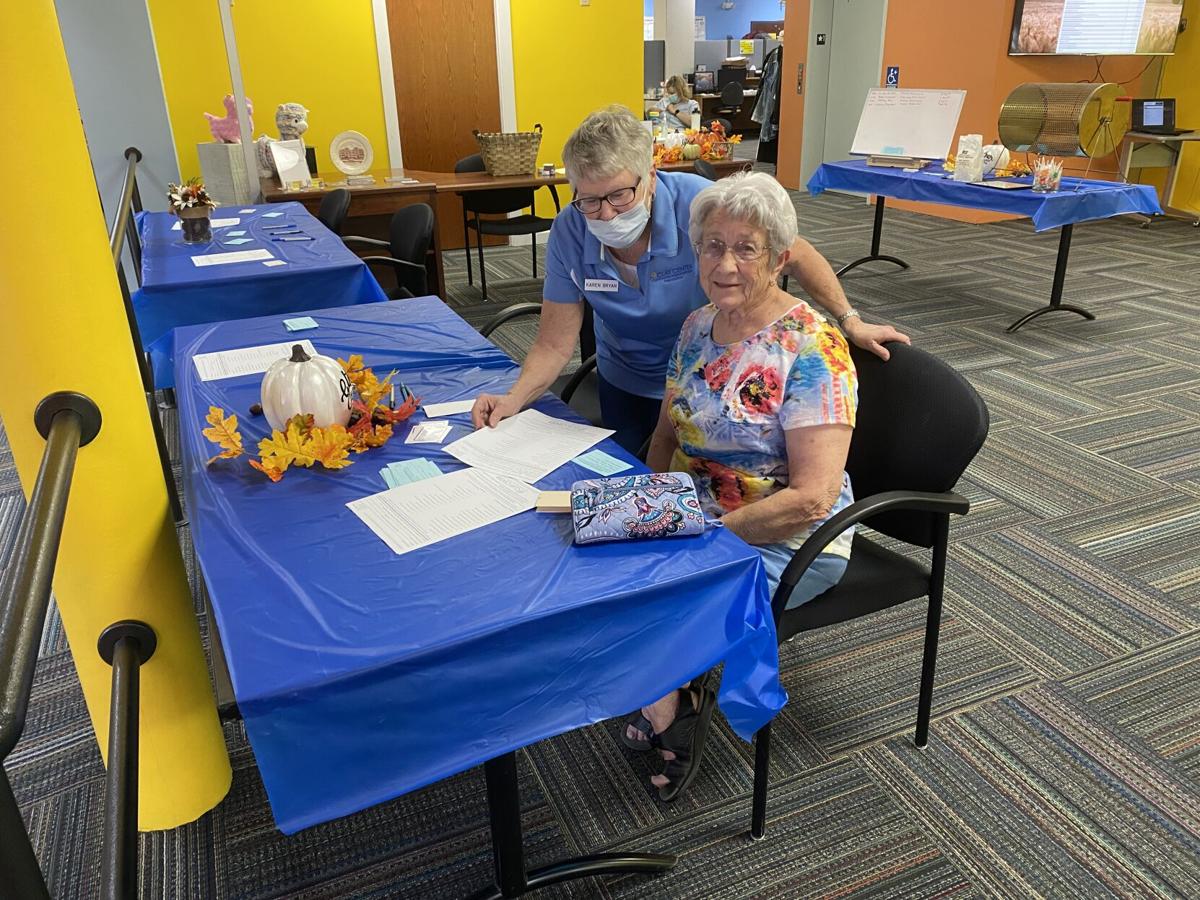 Kathy Yarrow (left) turns in her donation form to Jill Mugler (right) while Karen Bryan (standing) looks on. Everyone who turned in their donation form during the Match Day live event was entered into an hourly drawing to have a $50 donation made to their favorite charity. (Photo by Joshua Smith)

The Clay County Wrestling Club tradition of hosting a free clinic to entice interested grapplers into the sport will continue with an exhibition next month.

The public is invited to an open house on Tuesday, October 26 of the recently completed Cloud County Community College Agriculture Arena.

Everything has its own month, week or day. Here during fall harvest in farm country, it’s fitting to recognize National Co-op Month and the benefits cooperatives provide through membership. We have been recognizing cooperatives nationally since 1964 when U.S. Secretary of Agriculture Orv…

After about a month into fall harvest 2021, area farmers and elevator staff continue to work day and night bringing in the corn, soybeans and grain sorghum or milo. The minimal weekend rains were welcomed and didn’t really keep farmers out of the harvest fields for too long.

Change is the only Constant

Most farmers are analytical by nature. Identifying and solving problems happens every day in the life of a farmer. Setting and accomplishing goals of what needs to be completed in a day’s work is a tangible way to see results. Along with a higher calf crop, reducing debt and increasing net w…

It could certainly be called the end of an era in Clay County when an estimated 200 or more people turned out for the auction of the Noffsinger Veterinary Hospital on Saturday, Sept. 11. The auction included the buildings and land as well as equipment and other items Dr. Clifford Noffsinger …

A LIFE OF LEADERSHIP AND LEGACY

James “Jim” Brown: a life of leadership and legacy

Clint Decker's "Hope for Today" column has appeared on the Friday Church Page of The Dispatch for many years. The monthly or twice-a-month column now appears in the The Dispatch on Mondays.Born in Poughkeepsie, N.Y., Decker was raised in a pastor’s home and is the youngest of four children. …

Welcome back to another week of Sophi knows. This is a good time to change your ac/furnace filters, cover your outside units and unhook hoses.

Welcome to Sophi Knows! Remember it doesn’t hurt in any way to help someone who needs it. No strings, just be that person.

Remembering those in Agriculture during Suicide Prevention Awareness Month

The girls were picking gooseberries in our pasture when they decided to take time out to look for their favorite activity of robbing bird nests.  They were at the far end of our pasture when they saw a big snake under a fallen log.  They immediately found some sticks and began killing the sn…

My Sister Gladys and Our Cousin Maxine